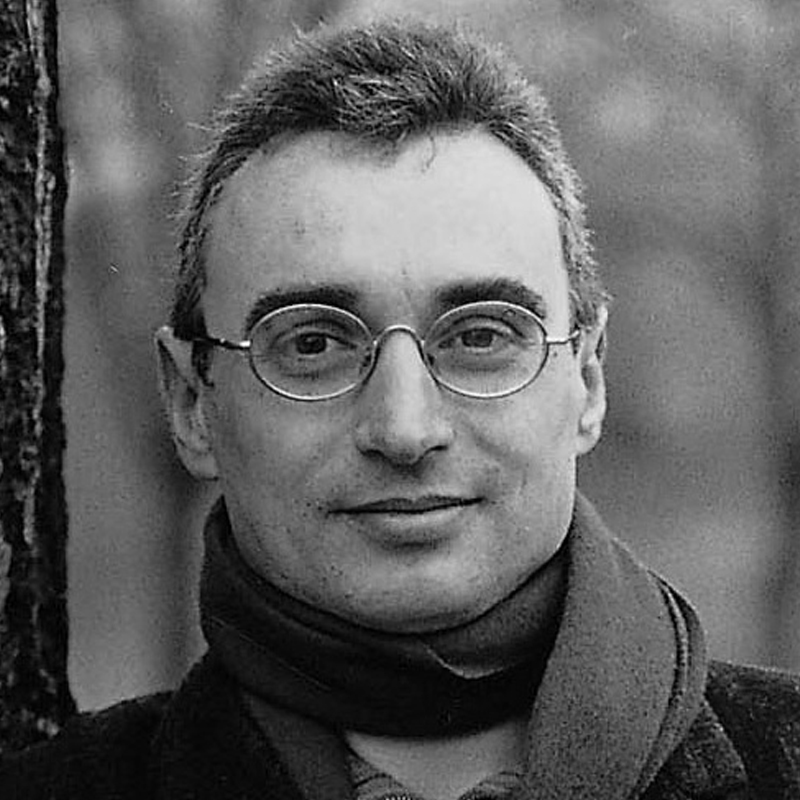 David Beauchard was born in NÓmes on 9 February 1959. He decided to use his surname reduced to a single initial for a pseudonym, as it was much shorter. He decided to study advertising at the Duperrť School for Applied Arts in Paris, as Georges Pichard was a teacher there. His master's style and that of his favourite authors (Tardi, Pratt, Munoz) influenced his black and white technique.

His first entry into the world of cartoons came as a scriptwriter for Olivier Legan ("Pas de samba pour capitaine Tonnerre", Glťnat, 1985) and as an illustrator on "Timbre maudit" in Okapi, an animal tale published in an album by Bayard in 1986.

At the same time he collaborated on small projects in the short-lived magazine Chic, as well as on "ZŤbre", a short five-episode series in A Suivre. In 1989, he regularly appeared in the short-lived Tintin Reporter where he created many illustrations and complete educational stories ("Les premiers escaliers mťcaniques', "Le P'tit Lu: un biscuit moderne", "Gťronimo", "Duel pour le PŰle Nord", "L'invention de l'aťrosol", etc.)

A founder member of L'Association in 1990, he was able to devote his work to pure graphic research in his magazine "Lapin" and in the collections with unusual formats launched by this cooperative of Parisian authors. The movement rapidly spread and was favourably received amongst independent publishers.

The metaphysical, the world of dreams and a marked taste for the fantastic are translated into expressive black and white strokes. This quest to evoke highly personal dreamlike or biographical elements found its ultimate expression in "L'Ascension du Haut-Mal", a series of five albums published by L'Association (from 1996 onwards) in which he depicted the life of his brother who suffers from epilepsy.

In 1997, the "Roman B.D." collection from Dargaud produced "TengŻ carrť", whilst he wrote the text for the unusual adventures of 'Hiram Lowatt" and "Placido" for Christophe Blain for the same publisher: "La Rťvolte de Hop-Frog", followed by "Les Ogres".

After this, another side of his talent was revealed in the Aire Libre collection from …ditions Dupuis. In April 2000, he developed the universe of the writer Marcel Schwob in "Le capitaine ťcarlate" with illustrations by Emmanuel Guibert; this is a fantasy story in the same vein as Pierre Mac Orlan. He then tackled a personal allegory on war and its destructive impact in "La Lecture des ruines" (2001). For this last work of great graphical power, Tomasine's clear bright colours provide support for his incomparable mastery of the black and white style without diluting it.