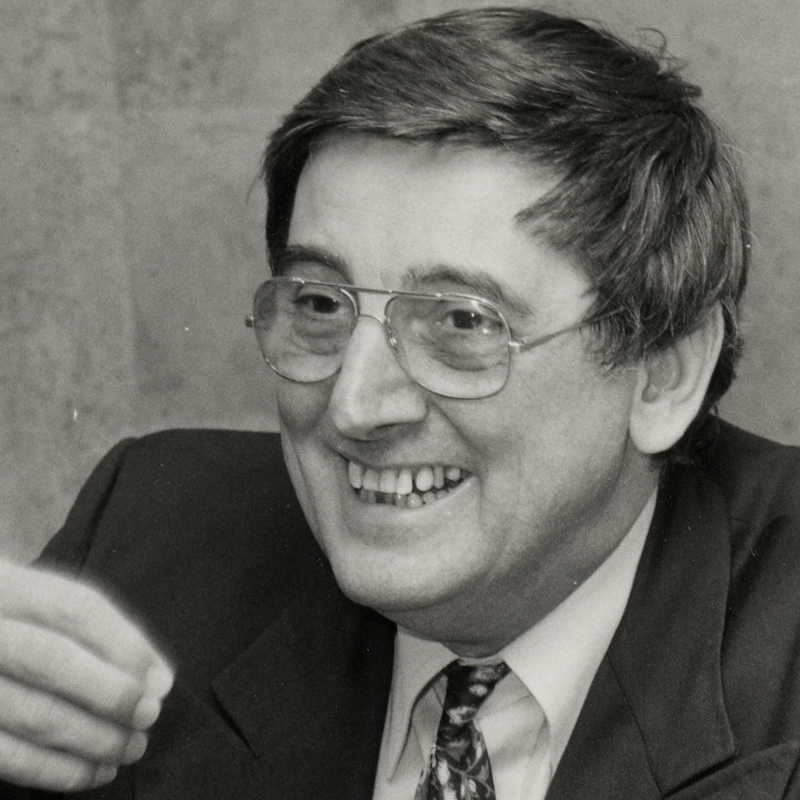 Born in Etterbeek on the 3rd of January, 1924, Andrť Franquin starts to draw as soon as he can hold a pencil. After years of boredom at school in Saint-Gilles, he becomes an apprentice illustrator with the short-lived CBA company in 1944. Among his colleagues are Eddy Paape, a studio veteran, the young Morris and a little later, the novice Peyo. Morris, who makes comic strips for MOUSTIQUE, is dragged over to Editions Dupuis by his friend, where Jijť takes them under his wing and introduces them to his pupil Will. All boarding with the Gillain family in Waterloo, this cheerful group will become "the gang of four".

The father of Valhardi suggests picking up the character of Spirou again, which he does by drawing "Le Tank", a complete story published in the Almanach Spirou 1947 and then by continuing an adventure he was already working on, "Les Maisons prťfabriquťes". At the same time he realises numerous illustrations in the weekly SPiROU and the scouting magazine PLEIN-JEU as well as comic strips for LE MOUSTIQUE and covers for LES BONNES SOIR…ES.

From 1948 to 1949 he follows Jijť and Morris to the United States and Mexico, but he becomes so homesick for Brussels and his loved one that he returns home before his friends do.

The next ten years will be mainly devoted to the "Spirou et Fantasio" series and newspaper illustrations: complete special stories, covers, various illustrations. Wonderful characters fill the world of this man: the count of Champignac, the incredible Marsupilami (1952), the journalist Seccotine, the fearful Zantafio and Zorglub, etc.

From time to time he works with others who help him out with a story: scriptwriters Henri Gillain ("Il y a un sorcier ŗ Champignac") and Maurice Rosy ("Le Dictateur et le champignon"), Greg for the "Zorglub", scene painter Will ("Les Pirates du silence"). But every project is always dominated by the talent of the perfectionist genius.

A misunderstanding with the publishing company causes him to launch the funny series "Modeste et Pompon" in TINTIN, in 1955. However, the situation is quickly resolved, and he allows others to continue with these characters as of 1959.

The enthusiasm with which everything that comes out of his pen and paint brush is received forces this man who cannot say no to a frantic production. In 1957 he flies a kite with an unemployed hero, the immortal "Gaston" thought out with Yvan Delporte to liven up the editorial pages: its success is so huge that the gaffer of the Editorial office is quickly ordered to tackle the real comic strip and Franquin has to make several plates a week. It would be unthinkable to reduce the number of "Spirou". A French newspaper, LE PARISIEN LIB…R…, demands three adventures of this character for an exclusive prepublication. A small Franquin studio is improvised to meet the demand. While Jidťhem assists him on Gaston, Roba helps him out with certain episodes for LE PARISIEN, Greg and Marcel Denis contribute scripts and ideas.

Nevertheless, Franquin is forced to drop one of his most recent creations, "Le Petit NoŽl", and has to struggle to stay healthy, his body weakened by fatigue. A depression forces him to interrupt one of his most remarkable stories, "QRN sur Btrezelburg", but he makes it a point of honour to continue "Gaston Lagaffe" in spite of everything.

Spirou becoming too much for him, he passes him on to Fournier in 1968 after one last feat of parody, "Panade ŗ Champignac" in which he strives to free himself from the constraints of traditional heroes and classical tales.


He devotes himself entirely to the single-plate gag with Gaston, and creates his first (lovable) monsters for the SPIROU covers in 1972. Several of his surprising creatures will be used for the book "Cauchemarrant" (…ditions Bťdťrama, 1979) and will also be used for postcards at …ditions Dalix.

He creates his first "Idťes noires" in LE TROMBONE ILLUSTR…, the short-lived cartoon supplement by Yvan Delpore in 1977 in SPIROU, and will work them out further in the monthly FLUIDE GLACIAL.

As he ages, his production becomes more limited, and "Gaston" will never live his thousandth gag, much to the disappointment of his millions of admirers.

In 1987, Marsu-Productions launches the Marsupilami in great adventures of its own, leaving the graphic realisation to Batem, initially under the supervision of Franquin. The script is written by Greg, followed by Yann, Fauche and Adam.

Two years later, Franquin draws in a style totally free of the heavy restrictions of the comic strip a mass of small characters called "Tifous" which will be used for an animation series by ODEC/Kid Cartoons studios with scripts by Delporte, Xavier Fauche and Jean Lťturgie.

Franquin departs from us on January 5th, 1997, shortly before the chronological updated edition of "Gaston Lagaffe" in 17 volumes appears at …ditions Dupuis. Two more volumes composed by Marsu-Productions with drawings forgotten or rejected by the author are published.

Franquin also teamed up with Delporte to edit several fantastic episodes of the series "Isabelle", illustrated by Will, and "Les DťmÍlťs d" Arnest Ringard et la taupe Augraphie", with images by Frťdťric Janin.

Hergť considered himself a very poor cartoonist in comparison with this great artist who has left his mark on the SPIROU paper and what is generally known as the Marcinelle School. His expressive style, becoming more dynamic as he matured, has enriched the world of comic strips with life, humour and energy.