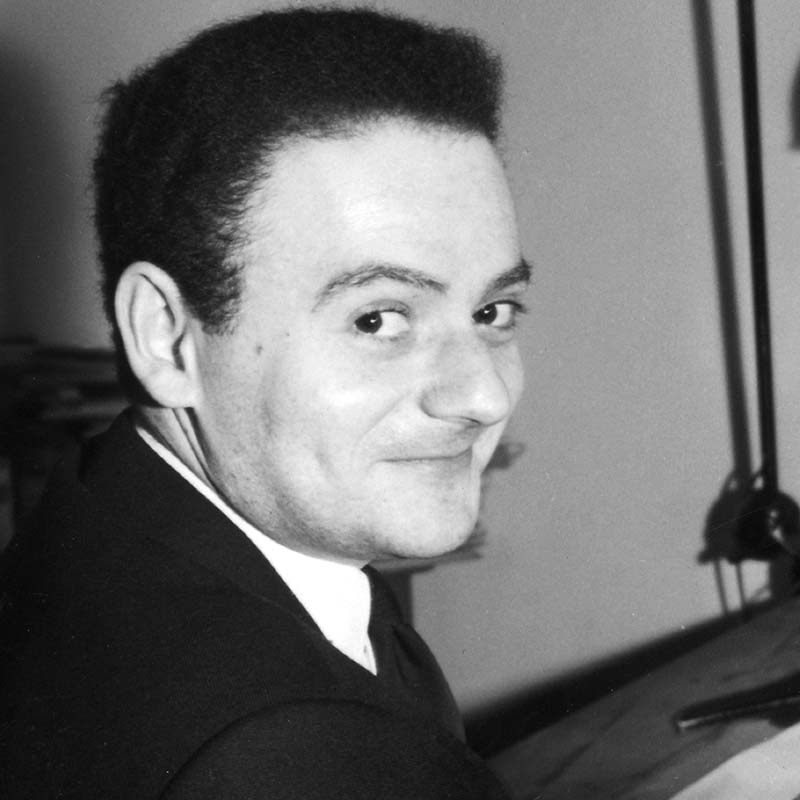 Renť Goscinny is born in Paris on the 14th of August, 1926, but raised in Argentina. He does his military service in France, shortly after the war, then leaves to try his luck in New York. He does all kinds of odd jobs in the publishing business and art.

He meets the dynamic trio of Harvey Kurtzman, Bill Elder and Jack Davis (the future founders of MAD), but more particularly several Belgians: Jijť, Morris and Georges Troisfontaines. The latter, the boss of World Press in Brussels, promises him a job upon his return to Europe. Taking him at his word, Goscinny steps into his office one fine day with his first entirely self-made comic book, an adventure of the detective "Dick Dicks", which will appear in several Belgian newspapers.

Hired by World Press Paris as a general dogsbody, Goscinny strikes up a friendship with Albert Uderzo and starts to write "Lucky Luke" scripts for Morris. His career as an illustrator ends after his second work, "Le Capitaine Bibobu", published in RISQUE-TOUT in 1955.

He writes better than he draws, just like the literary manager of the agency, Jean-Michel Charlier who traded his brushes and pencil for a typewriter in the early fifties.

During his five years of apprenticeship, Goscinny proves himself as a versatile and gifted worker, taking in the work from his colleagues, participating in an unsuccessful attempt to launch a weekly on television in the United States (TV FAMILY), writing funny chronicles and life-style articles in LES BONNES SOIR…ES, bubbling with ideas for realistic short stories for LE MOUSTIQUE, inspired by a pile of American illustrations bought cheaply, and producing a huge number of scripts.

Uderzo illustrates his funny adventures of "Jehan Pistolet" and "Luc Junior" for LA LIBRE BELGIQUE. Martial asks him for gags for his "Sylvie" published by LES BONNES SOIR…ES. He encourages Sempť to give the comic strip a try in LE MOUSTIQUE, which results in his first recurring character, "Le Petit Nicolas". At Dupuis he writes a few scripts for "Lucky Luke" realised virtually anonymously-, a few stories of "Oncle Paul" and a short episode of "Jerry Spring" for Jijť ("L'Or du vieux Lender").

Having an exclusive rights contract with the agency makes him feel powerless, and together with Charlier and Uderzo he proposes to Belgian authors to adopt a professional "Charter" to limit the powers of publishing companies and their agents. As soon as the project is launched, the three "rebels" find themselves out on the Parisian streets.

Together with a fourth accomplice, Jean Hťbrard, they then found the company …dipresse, which will illustrate several promotional magazines (PISTOLIN for Pupier chocolate, and CLAIRON for the company FABRIQUE-UNION).

With the support of Radio Luxembourg and a few sponsors, the …dipresse quartet launches the newspaper PILOTE on 29 October 1959, which will remain the weekly of Goscinny for a long time but no less the weekly of "Astťrix et Obťlix", the Gallic heroes created with his friend Uderzo who will conquer the whole world. The weekly is taken over by Georges Dargaud a year later, who retains his winning team, Goscinny for the humorous section and Charlier for the great realistic series.

Always on the look-out, he discovers and accepts many new talents who overthrow the traditional rules of the classic comic strip. When publication is reduced to monthly editions in order to avoid a crisis, he devotes his time increasingly to his personal work. He dies on the 5th of November 1977 in the saddest gag he could have imagined: during a cardiac endurance test under medical supervision.

The work of Goscinny is not limited to comic strips: he has also written delicious short stories and chronicles, film scripts and short funny television programs. It is a pity that they were overshadowed by the triumphs of Astťrix. The clarity of his style and his humour full of detailed observation place him between Giovanni Guareschi and Pierre Daninos.